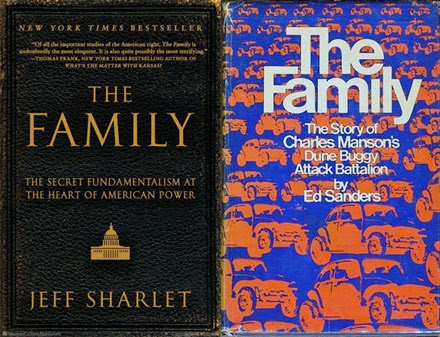 Recently we snickered when we learned that the organization behind that whole "C Street" house of adulterous Christian lawmakers was called "The Family." Hilarious, right? And now there's a whole new book about the organization, pictured above, left. They are so sinister! Haw, no, not really. But since it's the Big Manson Anniversary, let's look back at another great book with the same name, Ed Sanders' brilliant 1971 exposé of the Manson family, shown above, right.

At first blush, this is just a funny coincidence. But when you think about it, they're really not all that different:


*So far, this has not actually been confirmed that the C Street group has done this, but I wouldn't put it past them.
Posted by Peteykins at Tuesday, August 04, 2009

Princess, I knew you were cool, but I had no idea you were cool enough to be an Ed Sanders fan. You are very cool.

The Fugs?
I had their album.

So THAT'S what "Speed Buggy" was all about. And I thought it was just a mechanic and his friends and their wacky animated car.