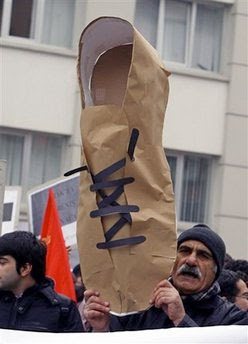 A Turkish leftist holds a model of shoe as he marches to the U. S. embassy to protest against the invasion in Iraq and to express the solidarity with Iraqi journalist Muntadar al-Zeidi, in Ankara, Turkey, Thursday, Dec. 18, 2008. (AP Photo/Burhan Ozbilici)

So creative! Indeed, al-Zeidi performed a valuable public service by providing pretty much the entire world with a single, potent symbol of dislike for our dreadful outgoing president. Well done! Also from yesterday's demonstration in Turkey: (AP Photo/Burhan Ozbilici)
And the offers are pouring in:

Also Friday, the head of a large West Bank family said it is willing to offer one of its eligible females as a bride for al-Zeidi. The leader, 75-year-old Ahmad Salim Judeh, said that the 500-member clan had raised $30,000 for al-Zeidi's legal defense.

Something tells me al-Zeidi isn't going to suffer much more, and then afterward... jackpot! 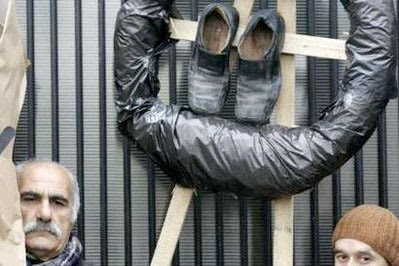 (Reuters)
He should be at least as celebrated as the guy who created the Obama logo. The shoe thing is really funny! I wonder if they know it could be a potent anti-Condi symbol as well? It's always all about the shoes, people, as I've been saying all along: I like the big cardboard shoe up top. It makes me think there should be a statue erected somewhere in al-Zeidi's honor; a giant bronzed shoe, in mid flight.

You'll probably hear from Fran, who encourages us all to send a shoe of our choosing to la Casa Blanca.

Some Egyptian has offered his daughter to be al-Zeidi's bride, and the young woman has consented, saying it would be an honor to be married to a hero.

The thing is, we may be looking at a one hit wonder here, or a no hit wonder if we count how many of the shoes hit their target. I wish al-Zeidi all the best and a quick exit from prison, but we could be looking at the Arabic world's version of Joe the Plumber here.

We won't have Bush to kick around much longer.

Oh my! If protesters want to get Condi's attention, it will HAVE to be Ferragamos! Indeed.

"It's always all about the shoes, people..." Well said, beloved Princess, well said.