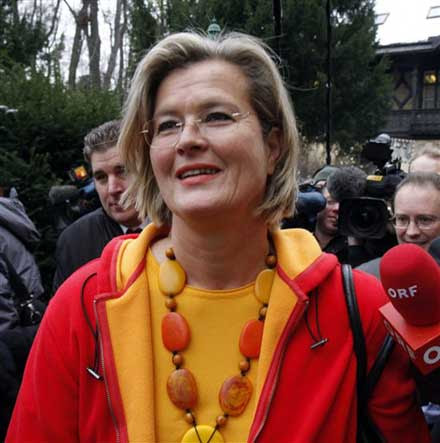 OK, let's take a deep breath and appreciate that Ursula, on her way to, I guess, her political denouement, had the fabulousness still within her to wear that incredible necklace! Awash with yellow and orange!

I mean, Mr. Obama! You haven't totally sealed that deal with Hillary, have you? Because come on! Look who's suddenly available! The Anti-Condi!

But, like, I'm still trying to figure out what happened to Ursula. Even though I've been obsessively covering her for, like, years, one could somehow get the impression that I'm not really familiar with, you know, what Ursula does. Or did. Whatever. So anyway, it's fully not very comforting to read things like this:

The new coalition hopes to avoid the internal bickering that paralysed the outgoing government.

Uh, oh! Internal bickering! I totally did not know anything about this! Was Ursula an internal bickerer? They always look so happy in all those shots! No, no, no, I will not believe it. She is a totally affable, affable giantess, after all.

Michael Spindelegger, the deputy parliamentary speaker, will take over from Ursula Plassnik as foreign minister.

Plassnik resigned on Sunday because the government programme left a door open for national referendums on future European Union policies, a key campaign promise of the Social Democrats which she opposed.

Now we're getting somewhere! So, um, does anybody know what that means?
Posted by Peteykins at Monday, November 24, 2008

I'd be happy to love her on the basis of that necklace alone. Yum!

remembering the good times. Remember the fried egg shoes she wore? I think we need a retrospective of all things Ursula

yes yes yes!! i vote for a ursla retrospecive

I have no idea what that means, but I want that necklace. And the fleece. I live in the Pacific Northwest, and doing fabulous fleece like that is not easy, people!

Ok Princess, I am going to do my bestest to explain why Ursula quit her job! In the Austrian parliamentary system, a party has to win 50% plus 1 of the seats to form a government. There are lots of parties in Austria so one party rarely wins enough, so there are coaltions of several parties that form in order to make a government, and share the Cabinet positions between then. But when the parties disagree on something, the coalitions break-up and it's back to the drawing board. At the most recent election, Ursula's party (the center-right wing OVP) got the second highest number of seats, and could of formed a government with some of the extreme right wing racist parties, who unfortunately did quite well in these elections (although the most famous extreme right leader just died and has been posthumously outed by his gay lover, so there you go), but Ursula in her wisdom rejected this plan, and instead the OVP formed a coalition with the center-left SDP. But there is a disagreement already: at the moment, Austria as an EU member agrees to EU treaties and laws through a government vote, but the SDP wants to change this to a public vote. Ursula, again in her wisdom, knows this is a bad idea, because Europeans often oppose EU laws without truly understanding them (Austrians in particular worry that EU laws will end to them being flooded by East European migrants, the Mexicans of Europe). If Austria rejects too many significant EU laws and treates (eg the Treaty of Lisbon, already rejected by the Irish people), they run the risk of being ejected from the EU. This would be very bad for the Austrian economy, and Austrians would have to get a passport to go on holidays to Greece or Italy, which is a pain in the butt really. Ursula is rightly opposed to this, and could not work with a government that doesn't recognize these problems. So Ursula knows what she is doing, and it is v.v. sad that she had to go!

Hope this explains a bit more on her untimely exit!

Totally right, Tatinka. Basically, Ursula wanted to ensure that ignorant Austrians can't get a chance to vote on things they don't understand and would jeopardise a) Austrian interests in the long run and b) European integration.

Ah! That all makes sense! Thank you!

Explanations are nice, but an Ursula retrospective would be even better!

Let's hope Mr. Rainbows seizes this historic opportunity to bring the Affable Austrian onboard! Think of the happy Euro feelings that would cause!

Did you catch the microphone at the right of the picture. She's being interviewed by ORF! Probably because that's how she must feeling; I know we are.