Sarah Palin Probably Stupider Than Any of Us Thought Possible 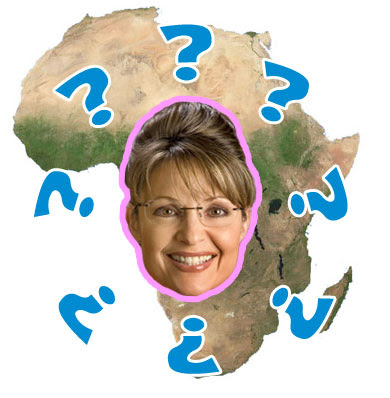 Via Think Progress, who has the mind-blowing video:

CAMERON: There was great concern in the McCain campaign that Sarah Palin lacked a degree of knowledgeability necessary to be a running mate, a vice president, and a heartbeat away from the presidency.

We are told by folks that she didn’t know what countries were in NAFTA — the North American Free Trade Agreement. That’d be Canada, the U.S., and Mexico. We’re told that she didn’t understand that Africa was a continent, rather than a series — a country just in itself. A whole host of questions that caused serious problems about her knowledgeability.

OK, never mind that knowledgeability is totally a made-up word, but... um, wow! I've been positing for a while that Sarah may be more muttonheaded than George Bush, but I wasn't expecting anything quite this dramatic.
Posted by Peteykins at Wednesday, November 05, 2008

Oh good gawd. If that's true, then she is definitely far, far dumber than any of us thought. And I thought Dubya was a dumbass...

I'm going to add that to my blog. Check it out -- you can tell Sarah goodbye:

Perhaps something managed to penetrate W's thick skull while he attended some of the top schools in the country. Apparently the curriculum at community college wasn't enough to penetrate Sarah's willful ignorance.

Yeah I speak that way too after spending a few days with my folks :-)

I was just talkin' with me husband about the video.

He doesn't believe she could be so stupid.

I say: Uhm, I think she is, but if she isn't -- Who cares! That they're saying on Fox and all over creation that she is is what's important.

A little caveat here. Ignorant and stupid are not the same thing. I happen to think Dick Cheney is really stoopid. History will indicate he got played big time by Chalabi, probably working for the Iranians. And Chalabi was a certified and convicted con man that most of us would not have bought a used car rom. (Yes, Cheney is also Satan incarnate and gobbles up infants daily to keep his robot heart pumping, but that's a separate issue.)

Palin is bone ignorant. She is probably pretty smart, at least in a cunning kind of way. But she, like most USAns, has zero reason to know where or what Africa is, or how electricity works, or what Mozart did besides being in Amadeus. Then you add medieval religious fanaticism to the mix, and the knowledge index goes into the negative numbers.

Cunning often rides roughshod over intelligence in politics. But Sarah Palins injection into the highest level was indeed boneheaded stoopid. And now here she is with her own cadre of followers. On the upside it might make a mass culling easier!

"I wish I could have told you this before the election." WTF, Carl?

Cheney is many, many things, many of them non-complimentary. But I don't think history will find him stupid as a general rule, though he may have been fooled in the instance you mentioned.

We are all of us ignorant of some things, but some folks like Palin and George W. work hard at staying ignorant, and that may be worse than any actual lack of intellectual capacity.

For the record, I think Palin is working harder than W. in the ignorance derby. It's awe inspiring, or maybe just awful.

(Edited by poster. If you are going to rag on people for being dumb, try to get the punctuation perfect.)

You need to see the O'Reilly / Cameron video I posted here.

Cameron says that Randy Scheunemann was fired because he didn’t like people Nailin’ Palin.

Are you kidding me? Girl was told to "buy 3 suits" for the election and she went on an over $150,000 shopping spree at Neiman Marcus with a hefty Republican donor's credit card! And reports state that the majority of the merchandise is "missing". Moose Girl is smarter than we give her credit for!

Princess, I hate to be a nag, but we really want your opinion on a serious subject: What did you think of Michelle's dress?
We know: She's no Cindy.
Sigh.

The extent of the Palin dumbness factor is not as much of a shock as the "hold back" of the story - I thought Palin could be that dumb, but I didn't think that Fox could be that partisan (especially after their allegations about story repression.) I agree with gnarleytrombone - WTF!!

A Newsweek campaign reporter was on the Today show this morning and said the same thing as Carl Cameron.

Apparently, the deal is that reporters are given extraordinary access in return for an agreement that much of these highjinks are 'off the record' until after the election.

I don't think any of the revelations about Palin would have swayed her supporters anyway.

Please send your crayons and work sheets to the Governor's Mansion, Juneau. She hasn't much time before she takes her place in our nation's Senate.

Michelle's dress was OK. I didn't think it was either great or horrible. OK?

Sarah is an insulated, incurious, dumb ass but Zoe hits the nail on the head: there are several pysch issues with that woman. I said from day one that she isn't smart enough to know she isn't smart enough.
The Wasilla hillbillies took advantage while they could. Attention? check. Expense account? check. Grabbing clothes and goodies? check.
Sarah will not be content to stay on the ice flow now. And she doesn't want to continue to be beat up in the news or impeached in Alaska so the next best thing or the best of the best thing is Fox News and a multi million dollar contract! Rupert has already said he'd give her a show.
Yay me!

Re: the post from Trex above. Isn't Trex one of Palin's kids? Also, I'd like some discussion of Michelle's dress. Some good pics in the Tribune, haven't seen any others. Can't quite figure it out.

I really adore Michelle and usually think she looks just fine but when she walked out in that dress I thought she looked pregnant. The more I looked at it I decided it was because of the ombre in the fabric. But its the kinda thing you wouldn't see except from a distance. I bet in a hotel room mirror it looked fabulous.

I did love it, though, that the whole family co-opted the color red that night and made it their own.

Linda: Close. Try Track. (And Trig. I'm embarrassed that I can name all five of her kids, yet have trouble remembering Sasha and Malia.)

As for Michelle's dress...I wasn't impressed with it, but then again I'm actually not normally impressed with her sheaths. They feel a bit boring now, for the most part, though they're her thing.

As for the actual topic of the post: I simultaneously can't believe that anyone could be this dumb, and yet can't wholesale reject it because it's Sarah Palin.

The best dresseed woman on the stage after Obama's speech was Joe Biden's mother. She was absolutely appropriate for her age and position/role, and that color drew your eyes right to her even though she was pixie height. She probably bought it tax-free in Delaware, too.

Michele was doing the mommy thing. Black to match Melia, red to match little Sasha. Barack's tie even fit into the color scheme.

They're the ensemble ensemble.

Well, just because you want to think
that all Republicans will fit into
one of two convenient baskets--
idiots (Palin, Bush, Reagan, etc)
or evil geniuses (Rove, Cheney)--
does not necessarily make it so.

The other side to that coin being
that Democrats are smart policy
wonks and when they say things that
are idiotic or just plain gibberish
it's because they're so deep into
the details that it's hard to grasp
their insightful and emminently
well-thought-out statements. "He's
a really-smart guy, really he is."

Anonymous sources say the truth when
I what to believe what they say and
they're cowardly swine when I don't.
I'll bet most people feel
that way.

Um, knowledgeability is not a made-up word. According to Merriam-Webster, it's one of the noun forms of "knowledgeable", which is:

having or showing knowledge or intelligence

In her case, she can't show knowledge or intelligence because she has none, perhaps?