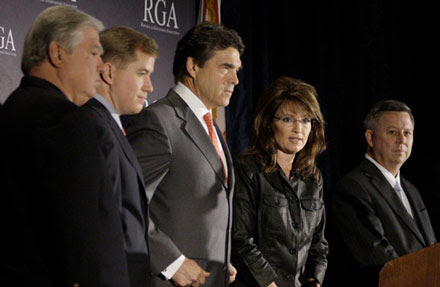 Delicious gossip about Sarah stinking up the place at the governors' thingy:

MIAMI (CNN) — Some Republican governors tell CNN they were not particularly happy with the way the Republican Governors Association press conference was executed Thursday, saying that they agreed to go as a show of GOP governors’ unity — but they ended up feeling like silent Palin supporters, since it was clearly a press conference called for her.

The GOP governors spoke to CNN on condition of anonymity.

One called it awkward: “I’m sure you could see it on some of our faces.”

Another Republican governor eyeing a presidential run in 2012** told CNN the event was “odd” and “weird,” and said it “unfortunately sent a message that she was the de facto leader of the party."

There has been palpable tension among some GOP governors gathered in Miami that Palin has been sucking up all the media oxygen.

In an interview with CNN, Mississippi Gov. Haley Barbour shrugged off that suggestion.

"That's just somebody running down a rabbit trail. There's plenty of oxygen here,” he said.

And, indeed, she just totally hijacked the press conference, the entire event, really, and the other people do look totally, totally pissed! Sarah! This is not the way to make friends! But honestly, how dare they! They should have had their own dumb press conference. But the hilarious truth is that if they had, all the questions would have totally been, all, "Where's Sarah? What do you think of Sarah?" Haw, they are SO stuck with her now. Hey, Republicans, Sarah Palin ate your party! And you simply must read J-Mart's amusing write-up of the event at Politico, where Palin's rivals are barely, barely able to conceal their hatred:

Meeting with reporters later that day, Minnesota Gov. Tim Pawlenty, Utah Gov. Jon Huntsman, and Meg Whitman and Rob Portman, who, respectively, are eyeing 2010 gubernatorial runs in California and Ohio, went from speaking passionately and authoritatively about the GOP’s challenges to an awkward near-silence, turning to each other and initially saying nothing when the dreaded Palin questions came about.

After the others had grudgingly taken a turn, Pawlenty, a finalist on McCain’s veep list, spoke up.

“You wanted me to respond?” he said with minimal enthusiasm. “Look at the time,” he joked before saying the requisite nice things.

While the governors were publicly polite, their aides, advisers and other Republicans here at this tropical networking and strategy session looked on at the Palin spectacle with a mix of bemusement, curiosity and annoyance.

“She’s our Britney Spears,” one veteran Republican, who is close to a prospective future presidential rival of Palin, observed after hearing her speak. “It’s just this cult of personality.”

God, how much better is this going to get?

**That's got to be either Pawlenty or Jindal! Take your pick!
Posted by Peteykins at Thursday, November 13, 2008

It's gotta be Pawlenty. He's still bitter that Psychogeezer didn't choose him and that he was stood up at the dance.

FYI: Here in MN we refer to Gov. Pawlenty as T-Paw. I think initially it was an attempt to make him seem cool, but now we mostly just say it to mock him.

PSP, I implore you to use his given name of Piyush. It goes over so well with the GOP base.

While I am the first to admit that Texas Governor Rick Perry is one of the most arrogant, conceited, mean spirited pricks on Earth (he's third from the left in the pic)I had to love it when he literally pushed Palin away from the mike, put his arm across her face and barked to the media, "One more question and that's it."
Palin just assumed the last question would be for her and she smiled sweetly, then jumped back to the podium.
His scowl would melt the paint off a Rolls Royce.

Palin really does need those stylists and clothes she "didn't need or want or ask for", doesn't she?

PS- I just can't see Governor Rick "Good Hair" Perry without thinking of Molly Ivins. So unfair that she's dead. My lord, but she'd have had a field day with this year's election.

It would be cool if Palin would do a big Britney and start doing drugs and driving drunk and chopping her hair off. Then Jesus could pardon her and urge her to run for office and we'd have another Redeemed candidate.

Would the American people play Whoops I Did It Again??

Is she seriously wearing black pleather in Florida? Oy

Has anyone else noticed her hair seems to be getting bigger by the day? I'm an old Jersey girl, so I ain't hating..well maybe a tiny bit.

Oh fer sure, she's a Big Hair just waiting to happen. Her toussled hair and the black pleather jacket tell me she was using her best asset (trampiness) to appeal to her GOP governor brethern.
Didn't work, but nice try.

Those other govs in that pic all look like they're trying to pass kidney stones the size of New Jersey. OUCH.

To watch Faux Nooz's coverage, you'd think the whole thing was just about Sarah, with the occasional glance at Piyush Jindal.

Hey, now trampiness has gotten me lots of places : )

Sarah looking like a serious politician as the governors' thingy:
http://bauergriffinonline.celebuzz.com/2008/11/bfm_enlarged/enlarged-sarah-palin-poolside-you-betch.php?bfm_index=2

Rick Parry's pissed because nobody's talking about how pretty he is. He's the only one not swayed by Palin's "assets" because, well, down here in Texas he's rumored to play for the other team. No problem with the concept, just that he's a member of the gay-hating party and all. He was caught speeding a while back with his boyfriend in the car and tried to talk the cop out of giving him the ticket. He failed. Oh, he's also homeless since someone torched the governor's mansion. Couldn't happen to a nicer guy.

I too have heard the rumor that Perry is gay. Once while I was at a Human Rights Campaign gala in Austin, he was there cruising guys' asses like a pro.
He wasn't even slightly subtle about it.

Now, now. I am here to report that Govn'r Good Hair (God Bless Molly Ivans, may she rest in peace) is married. In fact, here's a picture of his wife, Anita:

And isn't she beautiful in her tailored Republican red jacket, overdone makeup, Texas-sized blonde coif, and Barbara Bush single strand pearls? Just don't pay any attention to that $2800 crystal lamp, those $79 fresh roses sitting in a crystal vase (can't price that since I can't see the detail), or the $900 (give or take) covered crystal dish on the table in front. Those, mind you, were purchased at Texas taxpayer expense -- not at RNC expense. Our Anita is no Sarah!!!

So now, we all know that any man who is married must be straight. This is especially true when that man is elected to a governorship. So stop all this hatin' of our wanderin' eyes, narrowminded, chief elected a$$h*le. He's got enough people in Texas who already hate him; he doesn't need more of you outsiders.

Regarding the Dubiously Straight Good Hair's missus, has Governor Charlie Crist set a wedding date yet, or has his beard--excuse me, I did mean his fiancee--taken a flyer?