About That Fake LV Bag... 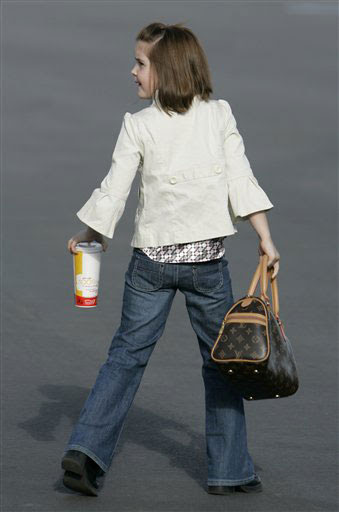 Ah, yes! The photo of cute li'l Piper with the Louis Vuitton bag! I've been meaning to get back to that. I mentioned it in a late update to my exhaustive, exhausting Neimansgate Roundup post after the great Deceiver wondered, like, WTF was up with Piper carrying an $800 bag, anyway? Well, to make a long story short, it probably isn't Piper's, and it's definitely a fake, not corresponding to any known real LV bag, OK? Fake, fake, fake.

So why bring it up again? Oh, because that fake purse has a story to tell! It tells a story of somebody who really wants to be the kind of person who has $800 handbags, somebody who aspires to the haut monde, somebody who will jump at the chance to be somebody, and will buy a (pretty good!) fake bag to give that impression. Somebody, in short, totally like Sarah Palin!

And today from Newsweek we got all the confirmation we needed that Sarah was not only not innocent in Neimansgate, but was a lustful, enthusiastic participant who jumped up and down at the chance to finally, finally go on big expensive shopping sprees at Neiman Marcus (right around the time the above photo was taken!), horrifying everyone around her with her gauche, arriviste ways:

While publicly supporting Palin, McCain's top advisers privately fumed at what they regarded as her outrageous profligacy. One senior aide said that Nicolle Wallace had told Palin to buy three suits for the convention and hire a stylist. But instead, the vice presidential nominee began buying for herself and her family—clothes and accessories from top stores such as Saks Fifth Avenue and Neiman Marcus. According to two knowledgeable sources, a vast majority of the clothes were bought by a wealthy donor, who was shocked when he got the bill. Palin also used low-level staffers to buy some of the clothes on their credit cards. The McCain campaign found out last week when the aides sought reimbursement. One aide estimated that she spent "tens of thousands" more than the reported $150,000, and that $20,000 to $40,000 went to buy clothes for her husband. Some articles of clothing have apparently been lost. An angry aide characterized the shopping spree as "Wasilla hillbillies looting Neiman Marcus from coast to coast," and said the truth will eventually come out when the Republican Party audits its books.

And now, fake bag no doubt replaced, she's tasted it. Now she has the Neiman Marcus bloodlust. We will never be rid of her. And that, Pony Pals™, is a good thing. If you think she's dragged the GOP down into her trashy world a few notches, you ain't seen nothing yet! Yay!
Posted by Peteykins at Wednesday, November 05, 2008

I'm awaiting some followups to the Newsweek story. Sarah said "someone else" bought her the clothes and she didn't even look at the labels or price tags. Now we hear she did the shopping, spent even more money, and that some clothes are "missing."

maybe she sold them on Ebay.

I believe the part about not looking at the price tags -- why bother when someone else is paying? Let's also not forget what the fake bag says about someone's concern for poor sweatshop workers, organized crime, and intellectual property laws.

haven't you lived in AK. jeez when you go to the lower 48 you go shopping!! and this is like once in a lifetime spree. rock and roll!!!

It seems like a lifetime ago, but I remember seeing one little item when la Palin first emerged from McCain's fevered brow (or walnutty cheek): the first mention of Sarah Palin that a Lexis/Nexis search turned up was of her waiting in line for a promotional visit by Ivana Trump to the Wasilla K-Mart, and speaking about the local hunger for glamor and "culture." Please tell me I'm not imagining this -- and it sure fits in with opportunistic shopping sprees.

My second favorite gem in that Newsweek piece is the story about how she's just so comfortable in the locker-room atmosphere of a campaign that she'd breeze through her hotel room clad only in a towel while male high-level McCain staffers she'd known for a few days wait around for her to get dressed.

The staffers (and the journalist guy who wrote the story) don't seem to cotton to the fact that her near-nakedness is nothin' but a big flirty flirt.

We gonna have the Wasilla hillbillies to kick around for awhile, ain't we?

My favorite thing about that picture has always been the combination of the (fake)Louis Vuitton bag and the MacDonald's cup.

To me, that says it all.

But wait. How can all this be true? On the Today show this morning, there in living video, was the Alaskan proprietress of missy Sarah's local second-hand store swearing that her most famous and frequent customer would NEVER have bought all those expensive clothes.. Who ya gonna believe... the businesswoman or Newsweek.

Thanks for the heads up on the Ivana/Palin googlage. The E&P article turned up this gem: "Palin smells like salmon for most of the summer". Te he.