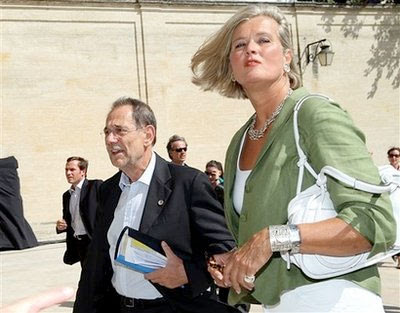 You didn't think I forgot about Ursula, did you? OK, maybe a little. It can be difficult to worship her regularly because she just isn't a fameball media hog. But look! She's hanging around with our favorite, the excitable Javier Solana. So cute! We love him! And here's our favorite affable giantess yesterday: 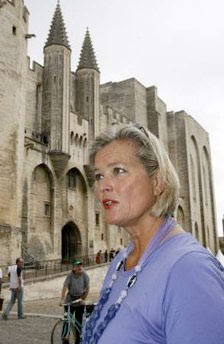 And the periwinkle greatness of the second outfit.

You needn't make a rule about no nasty comments about Ursula, because everybody loves her.

How I would love to have her tower over me.

Is her hair shorter than it used to be?

OMG, love her! I'd love to watch a debate on foreign policy between Ursala and Palin.

Yet again Ursula moves me to delurk, just to remark - what a dream, what a dish, what a dame!

Moreover, "affable giantess" is one of the most delightful descriptives I've ever run across. I adore it as much as I do her.

Mein Gott! She's flashing her cheekbones at the camera!

Also, thanks for the link back to the Solana / Rice tableau. That was a moment in U. S. diplomatic history well worth commemorating.

Summer has been good to her!

The accoutrements of Wonder Woman, the panache of Samantha Stevens, the height of Everest.

We are not worthy!

I didn't know Chico's had a store in Austria.