They're All Just Satellites of Planet Ursula 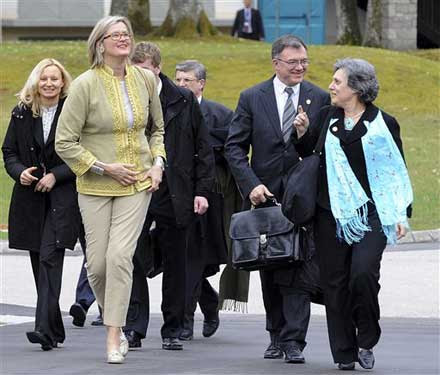 Aw, see how all the tiny people cluster around Ursula? She's like an island of refreshing lemon meringue. Everybody's smiling, laughing, and why not? It's the Anti-Condi, yay! I bet they were ALL wearing pastels within hours. For the affable Austrian giantess, being foreign minister is all about making friends and bringing people together: 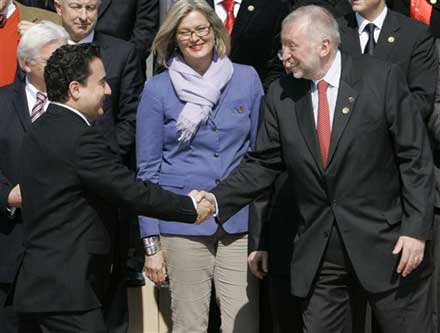 There is really only one thing that I can say, the words must be borrowed...

"Who can turn the world on with her smile?
Who can take a nothing day, and suddenly make it all seem worthwhile?
Well it's you girl, and you should know it
With each glance and every little movement you show it."

FranIAm beat me to it, but as impressed as I am with the height of Our Ursula (and for those keepign score at home, I am VERY impressed), it's the smiles that always get me. People are happy to be around her, just as I or any other Pony Pal would be.

As a BIG girl, I'm counting on the lovely pastel princess Ursula to make being a giantess fashionable! If anyone can.....

Jon, it was exciting hearing you work through that.

The shoes! the scarves! The SMILE! She IS the anti-Condi...

I think I have a woman crush

Zoe- get in line sister!!

She's just so much bigger than everyone else, in so many ways. sigh.

I like to think that the obvious is not wasted on me.

She's like Maria, leading the Von Trapp children in song!

It's no wonder Kinga is wearing a scarf in homage!

All you straight girls get out of my way! She's MINE and I plan to keep her.

<3<3<3
Could I possibly LOVE HER any more?
Just the thought that I maybe might just could POSSIBLY love her more makes me positively SWOON!
<3<3<3