OMG THEY CENSORED RON PAUL FROM THE REPUBLICAN SANDCASTLE!!! 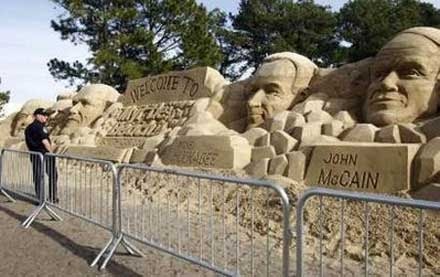 I think we have a winner in the Best Use of Metaphor category: a fragile construct surrounded by armed guards, but even the armed guards can't prevent the forces of nature from eventually making it crumble into dust Works for me! Also, ha ha ha ha ha: 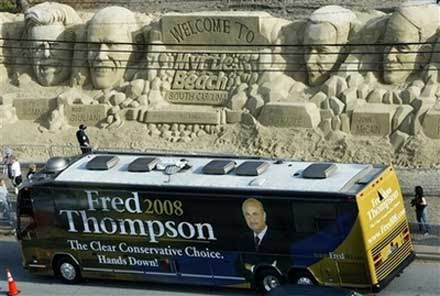 (AP Photo)
OK, so I have this friend who is a total, like, old-fashioned Republican guy, the kind they call paleoconservatives, right? This guy totally is in a think tank, used to be a lobbyist, blah, blah, blah... but anyway! He was just laughing about Fred Thompson; laughing until his sides hurt. Because Fred Thompson is just such a laughable loser. It was fun sharing that moment with him. LOL. But, OK, back to the sand castles. Hmmm... can we fit any more ironic symbols into this scene? Of course! Throw in a bemasked Hillary supporter: 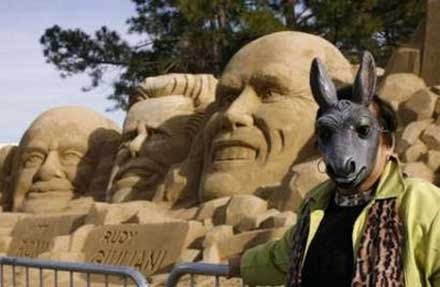 (Above and below, Reuters) 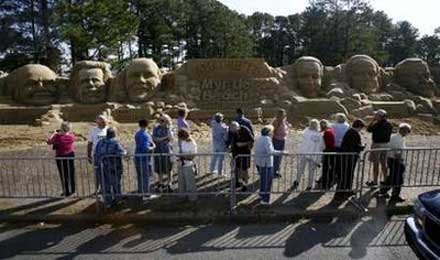 Keith Olbermann just covered this and described the Fred Thompson head as Darth Vader when we saw him without the helmet. I never thought about it much but that is what he looks like.

Olmec? Toltec? The pre-Columbian stuff was a lot better than this.

In the last picture there are six heads, but they only list five names in the caption. Is it Duncan Hunter? Alan Keyes? Please, Princess, inquiring minds want to know!

That is Ron Paul on the very far right end
http://www.zubby.com/user/blogs/view/name_randyzlobec/id_1378/title_myrtle-beach-south-carolina-welcomes-the/

I may have to stop golfing if this what Myrtle Beach has come to.

Thanks for the link to zubby, major mel. You get a much better look at the facial expressions.

In particular, Romney appears to be in the midst of a serious constipation problem while Thompson might be dozing off during a beejay.

It's said that anyone would spent time building this, but sadder still that Ron Paul was excluded.

When reducing taxes, wasteful government spending, reducing government interference in our private lives, and ending the war in Iraq are considered radical and far right propsals, then there is no hope for this country --- or its sheep-like "citizens". You get the government you deserve ... and receive the consequences that flow from your decisions. Good luck with that!

Thompson looks almost Buddha-like. I hope the Taliban don't know about this sculpture, they might come after it.

Oh, Princess--a fitting metaphor for the repug party indeed. I'm sure they sprayed some sort of lacquer-fixative on the faces, just like they do in real life.

They will need a really high tide to clean up that mess.

Anybody got the skills to do a back-of-the-envelope calculation on how far away you could be without the balloons rupturing under the launch stresses?

Perhaps Mike Huckabee can explain to his colleagues the significance of this passage vis-a-vis the sand castle, and/or vis-a-vis post-1980 Movement Conservatism. Let's just say that when the tide comes in, it's going to fun to watch both of them collapse.

So when does the Democratic tide come in?

"So when does the Democratic tide come in?"

It has already begun.

maybe the global warming-driven rise in ocean tides will rise up and wash this away.

if you look look at this arrangement from a sattelite you can see that all these little sand sculptures make up a meta image of ronald reagan,weeping and spinning at high rpm....

Helicopters should swoop down over that "sculpture" nice and low.

Rudy's resemblance to Nosferatu is unmistakable here. But all of these guys look like zombies, vampires, or ghouls. Truth in advertising.

I think Rudy looks more like one of those James Bond movie bad guys with scary teeth.

DO NOT TAUNT HAPPY SAND FACE