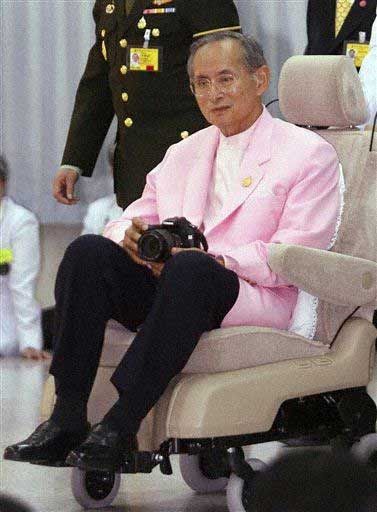 I... I just don't know what to say about this AP report on King Bhumibol Adulyadej of Thailand other than BEST KING EVER:

BANGKOK, Thailand - When King Bhumibol Adulyadej checked out of a hospital in a pink blazer, he made a fashion statement that resonated around Thailand.

Pink shirts instantly became this season's must-have item, and crowds are mobbing the shops that sell them. In recent public appearances, Bhumibol has sported a range of pastel sport coats, changing his style after decades in dark suits and setting new trends with each outing.

As the country gears up to celebrate Bhumibol's 80th birthday Wednesday with fireworks and fanfare, many Thais are honoring their beloved monarch by dressing like him.

"Now the T-shirt craze is green," The Nation newspaper said in a front-page headline after the king stepped out in a pale sea green-colored blazer. Days later, when he opted for baby blue, the paper forecast "a run on blue shirts."

UPDATE: Now with larger image, and this: 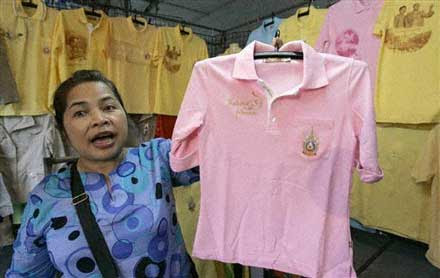 A Thai woman shows a pink shirt at her shop Friday, Nov. 9, 2007 in Bangkok, Thailand. People across Thailand have started wearing pink shirts in tribute to 79-year-old King Bhumibol Adulyadej, who checked out of a hospital this week dressed in a pink blazer and a pink dress shirt. (AP Photo/Apichart Weerawong)

Email ThisBlogThis!Share to TwitterShare to FacebookShare to Pinterest
Labels: unbelievably not photoshopped

Obviously he caught teh gay germs while in the hospital!

His honor guard wear shocking pink uniforms with pink phallic helmets. Bhumibol sometimes wears a black one. I love him so.

The Thai are great. Long live the King! And Princess Sparkle Pony!

HRH appears to have a halo, courtesy of the sparkly armband on his military escort.

He's like some wonderful Thai Wizard of Oz in Emerald City! But, like, the one with Diana Ross! Where the city kept changing colors and everyone matched!

Oh, come on, you know you've seen it.

Isn't it interesting to read about a country where everybody loves their leader?

Chaiyo! (appropriate salutation King Bhumibol, who by the way plays the saxophone and whose Queen has everything Jackie had going for her)

You can find the English translation of the King's Anthem here -- when I was a kid in Bangkok in the Sixties this hypnotic anthem was played at the end of every movie.

He still needs some sparkly stuff on his hooves... er shoes.