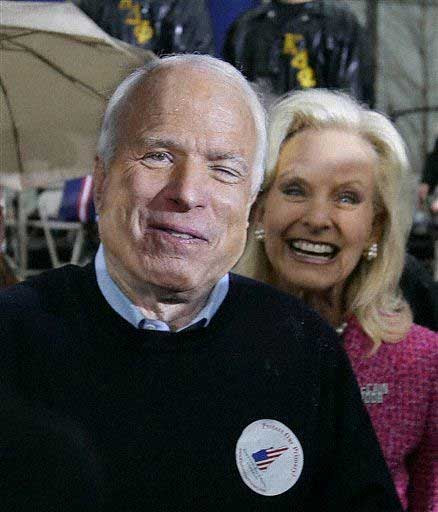 (AP Photo, 04-25-07)
Oh, sure, some of you think that my recent aborted brush with a political "insider" revealed that when it comes to exclusives... well, I'm not very. That changes now, because I've got today's ultimate get, a one-on-one interview with one of John McCain's notoriously gay sweaters. Haven't you heard? This treacherous piece of machine-knitted actionwear, seen above in happier times, nearly sunk, Donna Rice-like, the grizzled fossil's entire campaign! The maligned winter garment could only spare a few minutes, but you're not going to read this anywhere else! Yay!

PRINCESS SPARKLE PONY: Hello, Mr. Sweater, thank you so much for talking to me today. I'm sure it's been a hectic day!

McCAIN'S GAY SWEATER: No, thank you, honey, because I know you'll tell my story correctly, unlike the mainstream media!

PSP: When did you first join McCain's campaign staff?

MGS: I was brought in by the hair and wardrobe crew last December.

PSP: Were you the first gay sweater on his staff?

MGS: No, there were others. There was a small coterie of gay outerwear; just five or six of us. Some of them kinda... disappeared along the way.

PSP: It sounds like your relationship with the senator was strained. Would you agree?

MGS: Well, obviously now I would. I was naive. I should have noticed the signs... he would grumble. I didn't want to believe it because I felt so close to him! I never thought he'd totally turn on us like he did today. Now, when I look back, I'm embarrassed that I didn't listen to some of the other sweaters. They tried to tell me that the missing gay sweaters had been on the senator's bad side, and that he had disappeared them, if you know what I mean. Unraveled, they said. It gives me the chills just thinking about it.

PSP: How long have you known that you were a gay sweater?

MGS: Honey, all sweaters are gay; it's just that some are gayer than others. I'm an understated, dark blue wool crewneck, so I'm what you'd call a Log Cabin gay sweater. V-neck sweaters are very gay, indeed, and there were several of them on McCain's staff with me. There were no cardigans, though, because there's just no way he would be that gay.

PSP: So where do you go from here?

MGS: I'll nurse my wounds in Lauderdale for a few months, but in the Fall I'll come back to The District. There's always call for a well-connected gay sweater in Washington.

Cardigan sweaters are gay? Is there something we should know about Jimmy Carter?

Down with sweater dictators:)
Re:Carter - the smiling peanut wasn't a giveaway?

I need to know. I have many sweatshirts. They seemed manly enough, always willing to talk guy stuff (you know, baseball, breasts and power tools), but now I think it might have been a little... forced.

Arbiters of such things, please advise.

p.s. The woman behind him is scarier than Crazy Eyes on her craziest Pall Malls and Wild Turkey day.

Do you think that maybe one of McCain's runaway gay sweaters had something to do with Bob Allen's unfortunate incident?

Actually, as many commenters have noted, the sweater is one thing but SHE is another all together.

John McCain would not be having the problems he is having today if his shoes were just a little more gay.

Why,why, why does Broward County Florida attract the strangest of the estranged??????

And why would a sweater want to be in
our steaming paradise in the summer months??

I must echo the above commenters' horror at the featured picture to this post.

On the other hand, the mystery of the Crypt Keeper's parentage is no more!

OMG, it's true!!! I put the Wiki pic next to the McCain's pic above, and there is absolutely no doubt.

For those too lazy to put it all together themselves, I have added the two picture comparison at my blog.

Well, at least Walnuts is back to wearing his crazy-as-shit straight clothes again.
Now he's free again to blow his top, fire everyone in sight and continue to circle the drain in his campaign nosedive.
But at least he has found a shady spot with his face nuzzled in Bush's scrotum.

Oh linky love at my place, Princess. You're the only one with an interview.

Wow! Great interview, Princess! Now, that's what I call journalism! If only the rest of the MSM had your chops!

That's the beauty about liberals, we know some of our sweaters are gay and we don't treat them any different than our non-gay sweaters.