OK, so here's where I do something rare: write about my "real" life.

I live in a basement apartment in an early 20th Century row house. It's not exactly the most air-tight place, so every once in a while a mouse gets in, which I regard as absolutely the most traumatic thing about my homelife (which, I know, makes me pretty damn lucky).

Today when I got home, I caught one of those quick little scurries out of the corner of my eye. Fuck. Then I saw it several times in my living room running around, peeking around corners, mocking my very presence. It was a teeny-tiny one, the smallest I've ever seen and, yes, very cute. Arrrrrgh.

Let's backtrack a few steps, OK? I've got this old American flag which I recently dragged out of the drawer. It's an ugly one, made out of cheap nylon and faded several steps away from the red and blue standards favored by support-our-troops magnet manufacturers and decal-makers. I had it out because I was thinking of using it for some photo backdrops, and today it was, I admit, rather unceremoniously dumped in a pile on the floor. What can I say? I'm a very patriotic person, but the American flag has never really wormed its way into my heart. I've always been a materialist in the traditional sense of the word, so I never bought into the whole "the flag is patriotism made flesh" ideology.

But... ZIP! Across the floor scurried the mouse! And into the little flag-pile on the carpet!

Call it a panic response, but I jumped up and grabbed the nearest thing... a stack of vinyl records, and tossed it mercilously onto the flag-pile-with-mouse. Thinking that if I was in for a penny I might as well be in for a pound, I grabbed another stack of records and threw them on, too.

So now I have this wadded up flag containing a presumably dead mouse covered by a couple of stacks of records in the middle of my living room floor, and thanks to the magic of photoblogging™, you can enjoy the sight, too! 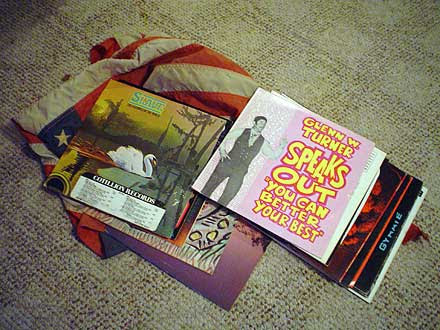 (Bonus! Yes, I did think of putting more photogenic album covers on the top of the stacks, but then I decided to keep it real. On the left is Slave's incredible 1977 funk masterpiece The Hardness of the World, and on the right is a very strange inspirational/religious album from 1967. To say that a whole entire record of a guy with a hairlip preaching is uneasy listening would be an understatement. Also barely visible are two Meat Puppets LPs, No More Heroes by the Stranglers, and Gyrate by Pylon.)
Posted by Peteykins at Tuesday, September 06, 2005

I'm having a flashback to the scene in "Sean of the Dead" where they try to behead zombies by flinging records at them.

Couldn't you just take the poor thing outside, you murdering Sparkle Pony? My heart, it is broken.

Raid. Spray an entire can of Raid all over the flag then leave the apartment for a while. Copious and enthusiastic drinking would be a good past-time at this point. While you're out, pick up a pair of authentic wooden shoes from the Netherlands. Once you return home, stamp all over the flag (first removing albums) until sufficiently flat. Make sure you're slightly drunk while you do this. Then scoop up the flag-mouse-pesticide mixture, and neatly dispose in a neighbor's trash.

I recently ended a two year relationship with my house mouse. I danced around its glue-trapped corpse wearing a tiara; I was ecstatic once I caught it. So. My sympathies don't lie with vermin. Much.

Ewwwwwwwwwwwwwwwwwwww. Just light it on fire or something. It's already on the ground, so aren't you supposed to burn it? I think I remember that from cub scouts...

I'm a hardened veteran of the house-mouse-anger-shame-remorse-fury-vengance cycle and I heartily support all of Sarathena's idea's.

I also strongly reccommend the RatZapper 2000, this is a real, cave like contaption that lures mice in and electrocutes them. Check your hardware store. In many years of pitched battle i've never found a better weapon, though to be fair, I never tried your method

So, did the little mouse die?

See what I mean? The whole mouse-in-the-house thing is totally traumatic to me.

Could an iPod kill a mouse? I seriously doubt it. This is a very compelling anecdote for the continued viability of the LP format. Vinyl forever!

So have you looked under the lp's yet?
He (she) could be just mortally wounded, but not quite dead.
You may have to drop some heavy metal on the poor little lost, lonley, hungry with a family to feed, sad beyond reasson at the situation it now finds itself in Mouse.
You heartless heartless thing you.
Haven't the little creatures suffered enough???

Can you get a cat? I found they were very efficient at getting of mice. (I had a mouse problem once.) I woke up one morning to this steady thumping noise. I look over and there is my cat, Lee, playing handball with a dying mouse. I yelled at him for waking me up, he gave me a look that said, "what? I'm tenderizing it".
After the mice see one of their comrades being used as a handball, they usually go away.

Second the cats suggestion. One caveat: No pet door under any circumstances. A friend of mine once ignored this restriction and found herself in bed with her husband, her cat and a not-quite-dead copperhead.

I had a mouse invasion a few years ago, and set out traps, but found I was too squeamish to look in them. I'd dread coming home from work, afraid I would find something, and was equally afraid I wouldn't find anything in them. Then a co-worker recommended a pest control company. This guy came and flung around blood-thinner snacks all over the house and under it and in the attic, and in ten days, no more mouse problem. However, my guilt was immense. See, I couldn't get my own hands dirty, but it was okay for me to hire a hit man, right?

Another solution which I've used (and prefer) is to stuff their points of entry with Brillo or another kind of steel wool. Cheap, easy, doesn't bump off any mammals.

We gotta do a record swap sometime...I actually have Bay City Rollers vinyl, and some really odd children's story records from the `70's if you're interested.

I haven't tested their lethality on anything besides good taste, however...

But, anyways, have you heard Curt Kirkwood's solo record, Snow?

I can't wait to see how you'll kill your karma for this one! be sure to blog about it, mmmm'kay??

I'm reporting you to Steven Colbert, you obviously hate America, what with squishing a mouse in the flag. Didn't they make that a federal crime yet along with not speaking english ?