UPDATE: These Whorses are Ready for the Glue Factory 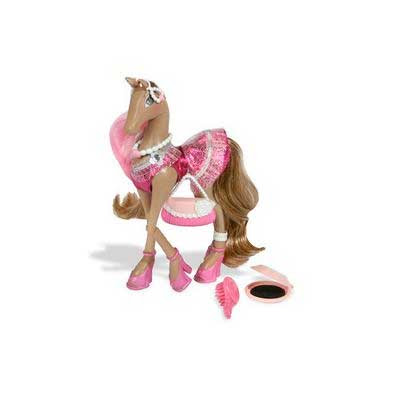 Of all the things I've written about on this blog, none have had as much longevity, gravitas or lasting impact as the discussion of Struts, the fashion-forward toy ponies which combine little girls' love for horses, shopping, eating disorders and sexual availability. These whorses, it turns out, really had legs.

I first wrote about these creations last March, shortly after their debut, and pondered whether maybe they had been designed to intentionally instill neuroses in budding young minds (they were). A few days later, I posted four full frontal shots, if you will, of the individual models, and we all rocked back and forth in the corner for a little bit. At the end of the month, I noted that accessory packs of new slutty outfits were available and that the disturbing polyvynl chloride fillies had acquired quite a following on the interwebs, but the reaction was not quite the delighted response, I imagine, that Playmates (seriously!) Toys had hoped for.

And ever since, over and over, like clockwork, new people discover the story of the sexy toy horses: here a feminist blog, there a livejournal page, here a tsk, there an indignant rant about juvenile sexualization, etc. Each month or so there's a new little flare-up of alarm over the poor Struts Runway Magic line; there's one zipping around the web right now.

So I just want to say to you all: they are totally ew, right? I mean, OMG. But get this: they are gone. Don't worry. It's over. Playmates Toys has abandoned the line and I believe that very few actual little girls were exposed to the forbidden sexy whorses. Most of the projected products in the line were never even made (I kept checking for the boudoir set), as far as I could tell. In fact, it seems to me that it wasn't just on the web that the toys flopped; it flopped on the shelves, too.

The crisis is over. The failure of Struts should be celebrated with a sigh of relief.

(There are still a few around, here and there, so get 'em while they're still totally hot.)
Posted by Peteykins at Thursday, July 02, 2009

Oh thank heavens, now if only we can get rid of Heelarious (high heels for girls who can't even walk yet).

Oh, but it is just "teh gay" that will be the sexual ruin of pure America.

Such, pardon the term, horseshit.

For what they're charging, I'll just come here for fond memories of the whorses.
By the way, 'whorses' is your funniest term ever.

Someone went broke underestimating the intelligence and taste of the American people.

It really is a new millennium.

What is it with obsessing over cleverly-molded plastic dopplegangers I wonder. I've always been a Lego man - design, create, deconstruct. My only deviation from that is a collection of small plastic dinosaurs. I have. Somewhere.